Today is Aishwarya Rai Bachchan’s birthday. The ‘Queen of Bollywood’ is the epitome of charm and grace. From her on-screen appearance to her appearance on the red carpet, it is difficult to take my eyes off Aishwarya. Speaking of red carpet events, how can we not mention the Cannes Film Festival? It would not be wrong to say that Aishwarya has ruled the French Riviera for years. Aishwarya first appeared on the Cannes red carpet for her 2002 film Devdas. Since then, the actress has given us many show-stealing outfits. From Roberto Cavalli’s mermaid dress in 2014 to this year’s black corset gown by Dolce & Gabbana, Aishwarya Rai Bachchan has rocked every look. Today on his birthday, we decided to take a brief recap of his iconic looks:

Aishwarya Rai Bachchan came, walked and won. We are not the only ones who are mesmerized by her beauty. Abhishek Bachchan couldn’t help but tweet about his electrification.

About 52 hours without sleep! Eyes close… and Mrs. looks like this!! Ok.. now eyes are open! pic.twitter.com/r8zIUTsBV0

Aishwarya Rai Bachchan looked like she stepped out of a fairy tale in this elaborate ball gown by Michael Cinco.

Aishwarya Rai Bachchan’s Cannes diaries are all about extravagant outfits. From bold prints to customized gowns, she knows how to fend off the fashion police. Something similar happened when she walked the red carpet in Michael Cinco’s dramatic number. The butterfly-inspired gown featured intricate handcraft work and was embellished with Swarovski crystals and a French palette. This dress came with a 10-foot long train.

She sprinkled stardust on the red carpet in this out-of-the-box creation by Jean Louis Sabaji. Aishwarya Rai Bachchan skipped the accessories and allowed her elaborate ensemble to do all the talking.

Aishwarya Rai Bachchan was the personification of Venus, the Roman goddess of love and beauty, when she walked the red carpet in a custom Gaurav Gupta robe. The costume was “inspired by the birth of Venus”. The halo-like element behind his head was the shell that Venus rises from in Botticelli’s famous painting The Birth of Venus.

We would like to finish it off with a desi look.

Aishwarya Rai Bachchan channeled her inner desi girl as she stepped out in a chikankari sari with a jacket in place of a choli. The jacket had heavy golden work on all sides. 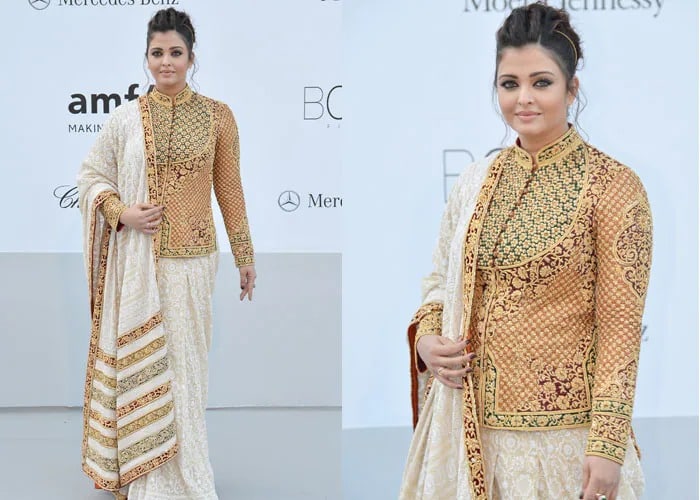 We know it’s hard to fit her Cannes red-carpet appearance on the list but we tried. I hope you liked it.