Bollywood actress Ananya Panday, who recently flew to London, is leaving no stone unturned to bless the hearts of her fans by giving them glimpses of her latest trip. Be it enjoying mouth-watering delicacies or taking a casual walk on the streets of London, Ananya appears to be having a ball. The youngster, who is known for her peppy sartorial choices, opted for a dazzling brown bodycon outfit.

The turtle-neck ensemble that perfectly fit her bodice was accessorized with a sling bag. Statement earrings, bracelets and sunglasses accentuated her outfit. Meanwhile, sleek hair left open, dewy makeup and glossy lips completed her entire look. Ananya Panday shares a timid smile as she captures herself in the alluring selfie. Take a look at the photo below:

In a subsequent Instagram story, Ananya is seen satisfying her sweet tooth with a mushroom-shaped dessert. Before devouring the tasty dish, she clicked a photo and called it the ‘cutest little dessert.’ In another photo, the actress flaunted the view of London street that she’s enjoying. 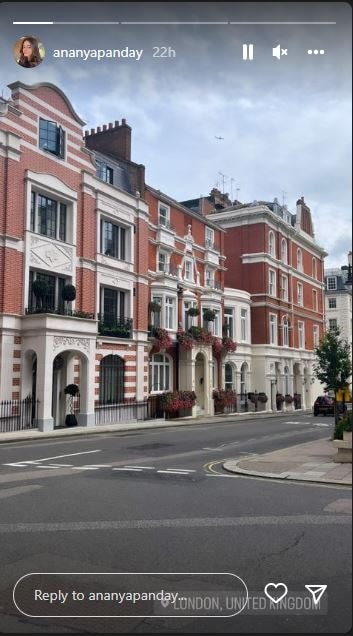 On the professional front, Ananya Panday was last seen alongside Vijay Deverakonda and Mike Tyson in the pan-India sports action Liger. Currently, she has multiple projects in the pipeline including Kho Gaye Hum Kahan with Siddhant Chaturvedi and Adarsh Gourav. Penned by Zoya Akhtar, Kho Gaye Hum Kahan is helmed by Arjun Varain Singh.

In addition to this, Ananya has already kick-started the filming of Dream Girl 2 alongside Ayushmann Khurrana. The original movie starred Nushrratt Bharuccha as the female lead. Directed by Raaj Shaandilyaa, the film received critical acclaim from fans and critics alike. Such was the success of the film, that it entered the 200-crore club at the box office.