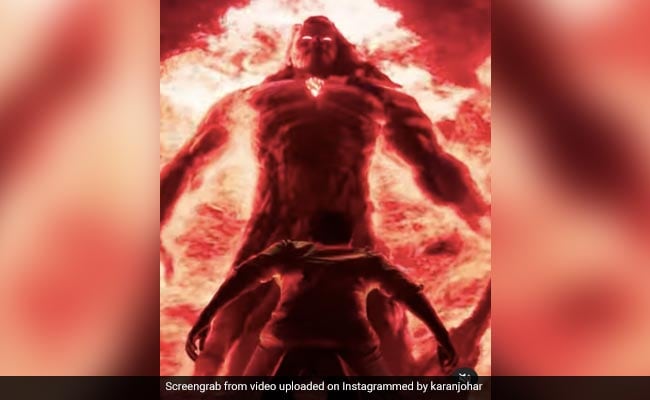 A still from the teaser shared by Karan Johar. (courtesy: karan johar)

Ranbir Kapoor and Alia Bhatt’s much awaited magnum opus Brahmastra is all set to release in theaters in just 10 days. To mark the countdown, the film’s producer Karan Johar has shared a new teaser featuring Ranbir Kapoor in the lead. In the clip, Ranbir is seen facing a gigantic figure, which fires through him with a voiceover of a woman who says: “Tujhme agni astra ki takat hai. who are you [You have the power of the Fire Astra. Who are you]?” In the caption, Karan Johar said, “In just 10 days, you will experience the universe of #Brahmastra. Coming to theaters on September 9th!”

Brahmastra director Ayan Mukerji also shared the same video on the occasion and said: “10 DAYS TO GO. Can’t believe we only have 10 days before Brahmastra releases. All these years, Brahmastra has mainly concerned me and the core team around me… but from September 9th – it will be more for the audience who experience it and will hopefully appreciate it. What a very emotional, nervous, exciting, non-stop working day as we prepare to let Brahmastra go completely into this world! ,

Ayan Mukerji recently also shared the inspiration behind his vision for Brahmastra. In the caption, he said: “The thread with which the Brahmastra is woven ran deep inside me as a child. I grew up in the love stories of Indian history. My father used to tell me a lot about our mighty gods and goddesses, and I was very impressed by them… a certain spiritual depth in Indian philosophy and even science came naturally to most of us growing up in India. affects people’s lives.

Saying that he was very inspired by books and films, Ayan Mukerji said: “And so, as soon as I started making Brahmastra, all this inspiration that was buried within me came bubbling up and I realized that I could not make my own. What was filming in the imagination was the colors of what I had absorbed.”