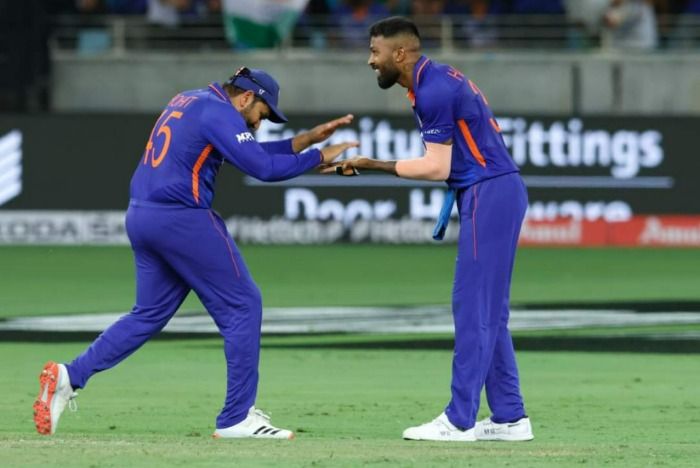 Dubai: It went down to the wire, but Hardik Pandya held his nerves to take India home in the last-over thriller on Sunday in Dubai in their Asia Cup opener. Apart from picking up three wickets, Hardik scored 33* off 17 balls. Following the five-wicket win, India captain Rohit Sharma hailed Hardik for his all-round show and reckoned he is much calmer and more confident about his abilities.Also Read – Dinesh Karthik Bows to Hardik Pandya After Match-Winning Six; PIC Goes VIRAL

“His batting quality we all know and it’s been brilliant since his comeback. He is a lot calmer now and more confident about what he wants to do, whether it’s with the bat or with the ball. He can bowl really quick, we saw that today with those short balls. It was always about just understanding his game and he’s doing that well now. In a high-pressure chase with 10 rpo needed, you can panic but he never showed any of that,” Rohit said at the post-match presentation. Also Read – Asia Cup 2022: Hardik Pandya, Ravindra Jadeja Do ‘Badla Badla’ As India Beat Pakistan By 5 Wickets

Earlier, Bhuvneshwar Kumar and Hardik Pandya played starring roles with the ball as India bowled out Pakistan for 147 in 19.5 overs in their opening match of Asia Cup 2022 at the Dubai International Stadium on Sunday. Also Read – IND vs PAK: Twitterverse In Frenzy As Hardik Pandya Powers India To 5-wicket Win Over Pakistan

While Pandya got India vital breakthroughs with his short balls to pick 3-25 in his four overs, Bhuvneshwar was excellent in starting and death overs to take 4-26 as India used the bounce well offered by the pitch. With left-arm pacer Arshdeep Singh taking rest of two wickets, it also marked the first instance of Indian seamers taking all ten wickets in a T20I match.