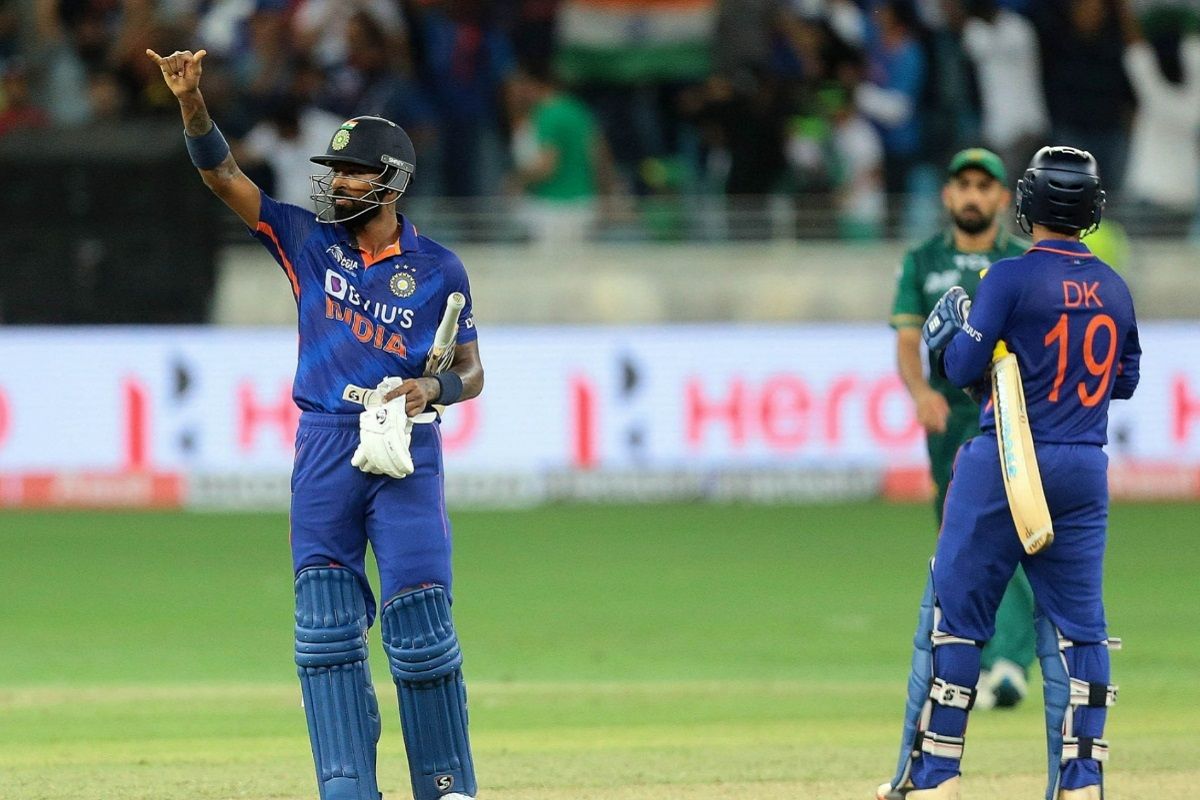 Dubai: Finishing off a tense chase of 148 for India to defeat Pakistan by five wickets in their opening match of Asia Cup 2022, all-rounder Hardik Pandya remarked that he would have favoured himself to finish off the match even if 15 runs were needed off the final over. On a chase of 148 on a two-paced pitch, India were needing 59 runs off the last six overs. From there, Pandya (33 not out off 17 balls) and Ravindra Jadeja (35) shared a stand of 52 runs off just 29 balls.Also Read – Hardik Pandya’s Wife Natasa Stankovic Beams With Pride As He Helps India Defeat Pakistan In Asia Cup Match

Even though the left-handed Jadeja fell in the final over off left-arm spinner Mohammad Nawaz, Pandya finished off things in style with a flat six over long-on to take India over the line and add another thrilling chapter in the history of India-Pakistan clashes. Also Read – Dinesh Karthik Bows to Hardik Pandya After Match-Winning Six; PIC Goes VIRAL

“When it comes to batting, the chances I take when executing, I’m likelier to pull it off when I’m calmer. In a chase like this, you always plan over by over. I always knew that there is one young bowler and also one left-arm spinner. Also Read – Asia Cup 2022: Hardik Pandya, Ravindra Jadeja Do ‘Badla Badla’ As India Beat Pakistan By 5 Wickets

“I knew they had Nawaz waiting to bowl, and while we needed 7, even if we needed 15, I would have fancied my chances. I feel the bowler is under a lot more pressure than me in the final over. I just needed one six in that final over. I try to keep things simple,” said Pandya in the post-match presentation ceremony.

With the ball, Pandya used his short ball to good effect and got extra bounce as well on a two-paced pitch to break Pakistan’s innings mid-way with his spell of 3-25, taking out Iftikhar Ahmed, Mohammad Rizwan and Khushdil Shah in overs 11-15.

“It’s important to assess the situation and use your weapons. For me, bowling short have been my strength, the hard lengths particularly. But you have to use them wisely. It’s about using them well and asking the right questions to make the batters commit a mistake,” added Pandya.

Jadeja, who played a huge role with the bat alongside Pandya to win the match for India, was in praise of how the all-rounder was able to see off the chase. “We wanted to play till the end, they have a very good bowling attack, their fast bowlers don’t give anything away.”

“I could have finished the game — left-arm spinner against the left-hander, but Hardik played superbly. He (Pandya) came out and said he was going to play his shots, and happy that he stayed till the end.”