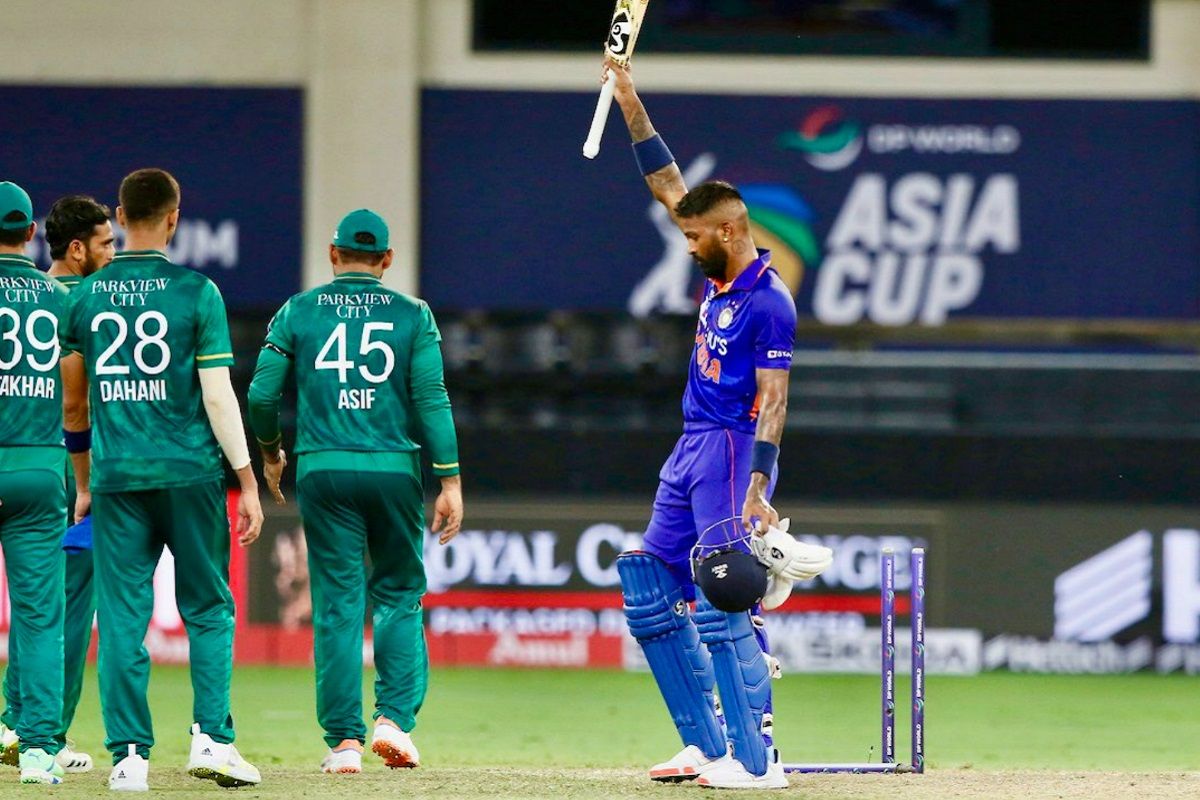 Dubai: India beat arch-rivals Pakistan by five wickets in a low-scoring yet typical charged-up “India-Pakistan” encounter of the Asia Cup 2022 at the Dubai International Stadium on Sunday. With this victory, India, placed in Group A, start their Asia Cup campaign on a high note. The pair of Hardik Pandya and Ravindra Jadeja took India home with two balls remaining.Also Read – IND vs PAK: Twitterverse In Frenzy As Hardik Pandya Powers India To 5-wicket Win Over Pakistan

Man of the match Hardik Pandya put up a splendid all-round performance as he remained unbeaten on 33 runs off 17 deliveries. He smashed 4 boundaries and a six. His bowling figures read 4 overs, 0 maidens, 25 runs, and 3 wickets. Also Read – WATCH: Hardik Pandya’s Calm Reaction Before Smacking Match-Winning Six Against Pakistan Goes VIRAL

It was indeed a close one after Pakistan were bundled out for 147 in 19.5 overs and while chasing India at one point needed 59 off the last six overs on a two-paced pitch. Also Read – IND vs PAK, Asia Cup 2022 Highlights: Pandya Powers India To Last Over Win Against Pakistan

From there, Pandya (33 not out) and Jadeja (35) shared a stand of 52 runs off just 29 balls. Even though the left-handed Jadeja fell in the final over, Pandya finished off things with a six over long-on to take India over the line and add another thrilling chapter in the history of India-Pakistan clashes.

Just like Pakistan, India had an eventful first over. Debutant pacer Naseem Shah struck on just his second T20I ball, as KL Rahul inside-edged to his stumps. Virat Kohli, playing in his 100th T20I, was dropped by Fakhar Zaman at second slip while chasing a wide one. Kohli was nervous in his start as many inside and outside edges came off his bat.

He showed signs of his authoritative self when he pulled through mid-wicket off Shahnawaz Dahani in the second over. After a top-edge went over the keeper’s head for a six, Kohli’s authority was visible in his slash through cover and whipping over mid-wicket to collect two boundaries.

Rohit Sharma, cautious till then, opened up in eighth over when he slog-swept Mohammad Nawaz over long-on. But the left-arm spinner had the last laugh as Rohit holed out to long-off on the final ball of the over. In his next over, Nawaz had another big scalp as Kohli chipped straight to long-off.

Jadeja started off his promotion at number four by smacking Nawaz down the ground for a 98m six. He and Suryakumar Yadav got a four each and relied mainly on strike rotation to keep the scoreboard moving.

The 36-run stand was broken by Naseem, who knocked off Suryakumar’s off-stump on the first ball of his second spell. With 41 needed off the last four overs, Jadeja and Hardik Pandya hanged in to bring the equation to 32 off the last three overs. Like India, Pakistan too were penalised for a slow over rate as one extra fielder came into the 30-year circle.

By then, Pakistan were struggling as their pacers got cramps and Jadeja survived an lbw appeal off Naseem Shah clearly in pain after a review showed the ball pitching outside the leg-stump. On the very next ball, Jadeja lofted with a straight bat down the ground for six as India needed 21 runs off the last two overs.

On the third ball of the 19th over, Pandya flat-batted Haris Rauf over extra-cover and got a boundary as Babar chased the ‘all, but couldn’t stop it from hitting the boundary rope. Pandya then swatted Rauf over wide long-on and brought out a short-arm jab on the last ball for a four splitting deep mid-wicket and long-on for perfection.

With seven needed off the final over, Nawaz struck on the first ball as Jadeja was clean bowled while going for an expansive slog. Pandya finished off the match in style by clobbering Nawaz over long-on to win an absorbing contest.