Alia Bhatt has been getting a lot of praise from the industry for her latest film Darlings.

Malaika Arora took to her Instagram Stories to give a shoutout to Alia Bhatt, Shefali Shah and Vijay Varma for their film Darlings.

Alia Bhatt’s Darlings that was released on August 5th on Netflix has created quite a buzz among fans and critics. Not only did the dark comedy garner favourable reviews for its coming of age storyline but also for the stellar performances by the cast Shefali Shah, Alia Bhatt and Vijay Varma. Among the tinsel town celebs who have appreciated Darlings, the ever spectacular Malaika Arora is the latest star to the addition.

On Wednesday, the model and actress took to her Instagram Stories to give a lauding shoutout to Alia Bhatt, Shefali Shah and Vijay Varma. She wrote, “What brilliant performances. I totally lovesss.” The star of the dark comedy Alia Bhatt was soon to respond with a flying kiss sticker. 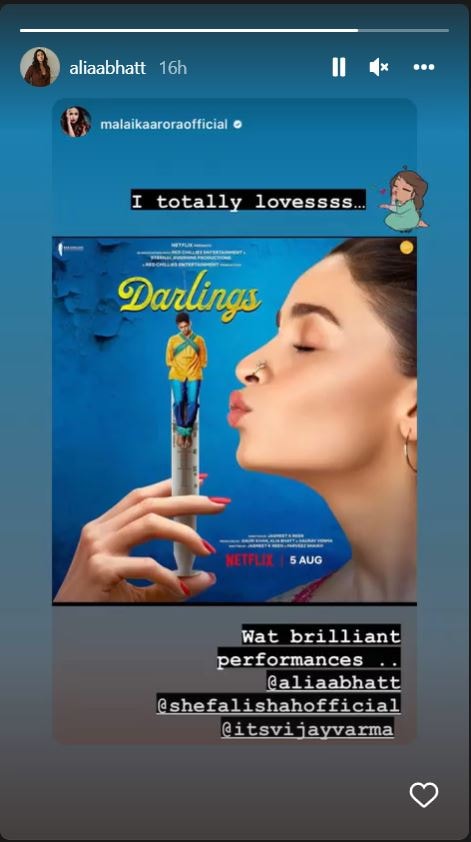 Last week, Dhadak actress Janhvi Kapoor penned a heartfelt note that was laced with praises and appreciation for the cast and crew of the film. She wrote, “Another winner! No words for you @AliaBhatt a film to be proud of and another performance that leaves in complete awe of your unparalleled talent! @shefalishahofficial you are beyond mesmerising. Wickedly colourful and deceivingly tragic. @itsvijayverma a humanised villain. You are brilliant. Loved hating you throughout. @jasmeetkreen congratulations on a home run. Last but not the least @baidnitin The maestro strikes again. Congrats Mr Baid on your consistency and your genius. This one’s a crazy ride.”

Directed and co-written by Jasmeet.K Reen and bankrolled by Gauri Khan(Red Chillies Entertainment) and Alia Bhatt(Eternal Sunshine Productions), Darlings is a black comedy drama film that stars Alia Bhatt, Shefali Shah, Vijay Varma and Roshan Mathew in the lead roles. The story is set in the backdrop of an abusive husband and It follows the lives of two women as they find courage and love in exceptional circumstances.

Sunny Leone praised Urfi Javed’s outfits, later replied “You can compete with me, but you can’t…”
9 mins ago

Wednesday X Dum Maro Dum is the best goth sync dance video you’ll see on the internet today and even Jenna Ortega would agree!
45 mins ago