In the last one week, the power shortage has increased to 1.4% of the demand.

Power stocks have risen in the past few weeks. The BSE Power Index hit an all-time high this week and is up 21.5% in the past one month.

The reasons are clear…

Most states have eased restrictions related to COVID and businesses are running at full capacity.

Also, the summer season has started and many parts of the country are facing heat wave conditions. Thus, attracting household electricity consumption.

But the supply side is moving in the other direction.

Coal accounts for about 75% of India’s electricity generation.

Supply constraints: Both domestic (from Coal India) and global (as a result of Russia’s invasion of Ukraine) have led to divergence of demand and supply.

The increased load shedding across the country is a clear indicator of the supply-demand mismatch in the industry.

Power shortage has increased to 1.4% over the last week, up from the 1% shortfall in October 2021 when India last experienced a severe coal shortage.

Power utilities such as JSW Energy, Tata Power and Adani Power benefit from this spread. They sell only a part of their total power generation on a merchant basis in the short term market, thus getting them a better price when demand increases.

Shares of Adani Power are witnessing tremendous growth this year due to several reasons. One of them is the demand for electricity.

The stock is rallying even after the Supreme Court ordered some state-run distribution companies in Rajasthan to pay dues of Rs 30.5 billion to Adani Power. 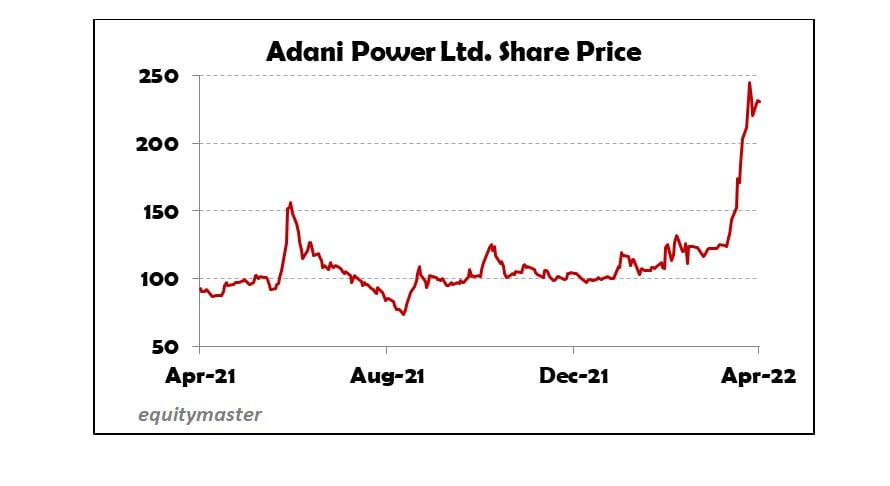 With major operations in Mumbai, Tata Power is a major beneficiary of rising power demand as the state lifts all COVID restrictions and businesses gear up to run at full capacity.

Tata Power is present across the entire value chain of conventional as well as renewable energy.

The company is developing home charging installations across cities to support the EV segment of Tata Motors.

The Budget for 2022 allocated an additional Rs 195 million in Production Linked Incentives (PLIs) for manufacturing solar modules to give a boost to the sector.

The proposal to issue ‘Green Bonds’ to raise capital for setting up green infrastructure projects in the public sector will further help the company.

The company’s shares have nearly doubled in the past year. 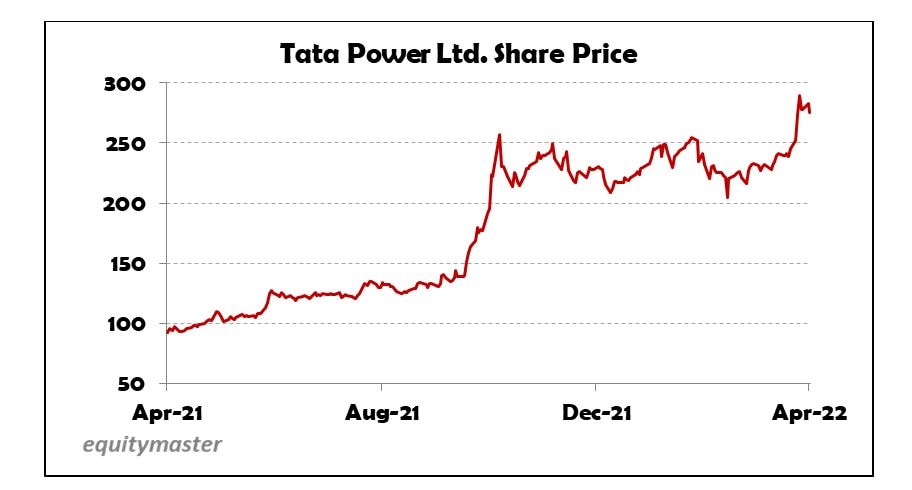 It appears that Tata Power is in a race with Adani Power to reach the market capitalization of 1 tonne.

CESC is mainly engaged in generation and distribution of electricity in its licensed area in Kolkata, Hooghly, Howrah and parts of West Bengal.

It operates thermal and renewable projects through its subsidiaries which have a combined generation capacity of about 800 MW.

It also has a distribution license for Greater Noida, Uttar Pradesh; Distribution Franchisees (DFs) in Kota, Bharatpur and Bikaner in Rajasthan, and a new DF in Malegaon, Maharashtra.

West Bengal’s electricity demand fell by 22% during the COVID pandemic. While economic activities are back on track, the state is witnessing huge demand for electricity.

The company’s shares are up 43.3% compared to last year.

NTPC is the largest power producer in India. So when demand rises, it should benefit the most.

For the fiscal year 2022, it saw the highest annual electricity generation of 360 billion units, registering a growth of 14.6% annually.

The coal based plants registered a Plant Load Factor (PLF) of 70.7% with an availability factor of 88.8%.

In a successful attempt to widen its renewable portfolio, the company received approval from the Ministry of New and Renewable Energy (MNRE) to set up one of the largest renewable energy parks in Gujarat with a capacity of 4,750 MW.

Last on our list we have Coal India. Although it is not a power stock, the company is an important subsidiary to the industry.

It is the largest supplier of coal to power generation plants in India.

Limiting supply in the non-power sector has helped power plants, yet, not enough to bridge the demand-supply gap. 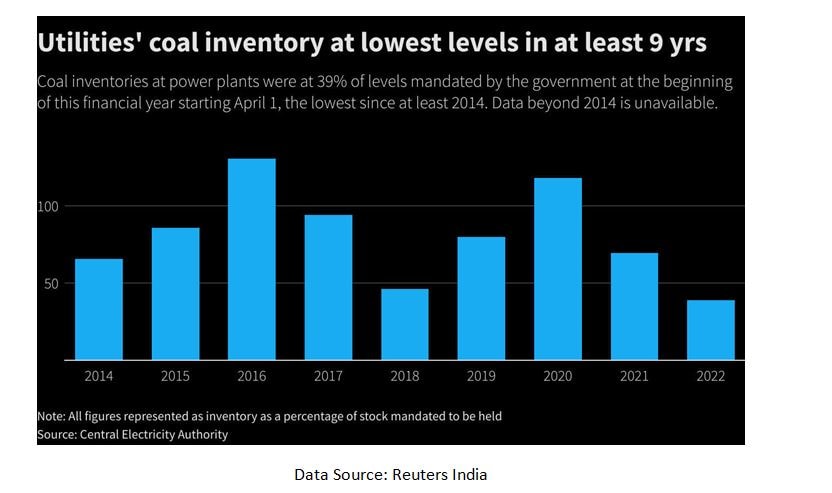 Globally, the demand for coal or electricity is higher than September 2021, making imports costlier. No wonder imports fell to a nine-year low in 2021.

This lack of supply has resulted in power outages in industrialized states like Gujarat and Maharashtra.

The only entity to benefit from this shortfall is Coal India, and one can see that in its rising stock price.

The Central Electricity Regulatory Commission, the central regulator to keep a watch on power generation companies, has revised the limit per unit of electricity traded on exchanges to Rs 12.

Even with limited prices, power rates are much higher than contracted long-term power purchase agreements (PPAs).

In addition, the proposed amendment to the Electricity Act will bring efficiency in this area.

With production at pre-pandemic levels and a growing urban population, the need for clean and unviable power supply offers immense growth potential in the power sector.

If sources are to be believed, several Indian states are likely to face power shortages in the coming weeks as power plants struggle to find optimum quantities of thermal coal amid rising heat demand. This will lead to higher import cost resulting in supply-demand mismatch.

So it is safe to say that momentum in power stocks is here to stay and may continue to rise.

Disclaimer: This article is for informational purposes only. This is not a stock recommendation and should not be treated as such.

Note: Equitymaster.com is currently unavailable due to technical reasons. We are sorry for the inconvenience caused. In the meantime, please access our content on NDTV.com. You can also track us on YouTube and Telegram.

This article is syndicated from Equitymaster.com