It was probably the toughest year for comedian Mallika Dua. The actress lost her mother Padmavati Dua aka Chinna in June this year. She fought a long battle with COVID which lasted for almost a month. After that, father Vinod Dua, who was battling a prolonged illness, also passed away last week.

It was on 4th December when famous journalist Vinod Dua breathed his last. Even before this, there were many rumors about his death, but Mallika clarified on her Instagram that she was battling in the hospital then.

Mallika Dua has now revealed that people called her ‘nazar laggai hai’ after the demise of her father Vinod Dua and mother Chinna Dua. Yes, you heard it right. The actress-comedian wrote a long note on her Instagram story, which she made up after almost an hour of thinking.

Mallika Dua wrote, “Human life is just a small part of our journey. Everyone should go. I hope I am able to live a small fraction of my angelic life. I doubt it but may be May they plot to do as usual. In the evergreen words of my friend Sunil Grover, Zindagi barbad ho gaya (My life is ruined)”

She continued, “Once again, turning to humor to give voice to my emptiness. Thanks for sending so much love and hope. Some people try to tell me that Nazar Lag Gayi Hum Log Ki (People have cast an evil eye on us). are the universe.”

The comedian also expressed her grief and mentioned how she feels hollow. “It took me an hour to type this because I feel empty. hollowed out. Whatever I was made of has been taken from me. I know it’s temporary. It won’t last forever. does nothing,” concluded Mallika Dua. 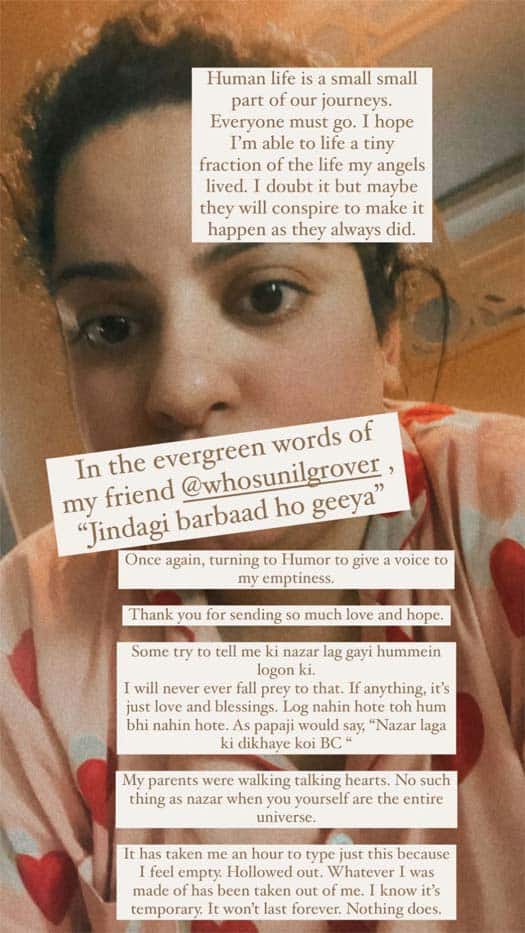 Love and strength sent to Mallika!

#UmarFeverEverywhere takes over Twitter as Umar Riaz fiercely takes a stand against his friends; fans...

Sushmita Sen Pictured With A Baby Boy On Family Outing