Anusha Dandekar is once again asked about Karan Kundrra, VJ’s reply shows that he is at his wit’s end!

Anusha Dandekar aka VJ Anusha has been in news regularly due to her breakup with actor Karan Kundrra. The actor – who is in the Bigg Boss 15 house winning hearts of the audience, Anusha has been questioned about the star on several occasions.

Dandekar asks the VJ if she misses him, even why they broke up and Ms Dandekar has answered a number of questions. Now, he was asked the same once again and he has a kika* response to the follower who asked him.

Anusha Dandekar recently conducted an ‘Ask Me Anything’ session on Instagram and shared some questions that came before her. She being a game, VJ Anusha also shared the question “Do y miss (not screaming an animated face)” although we can’t see who the fan asked if she was missing, the host’s reply answered it. Gave. 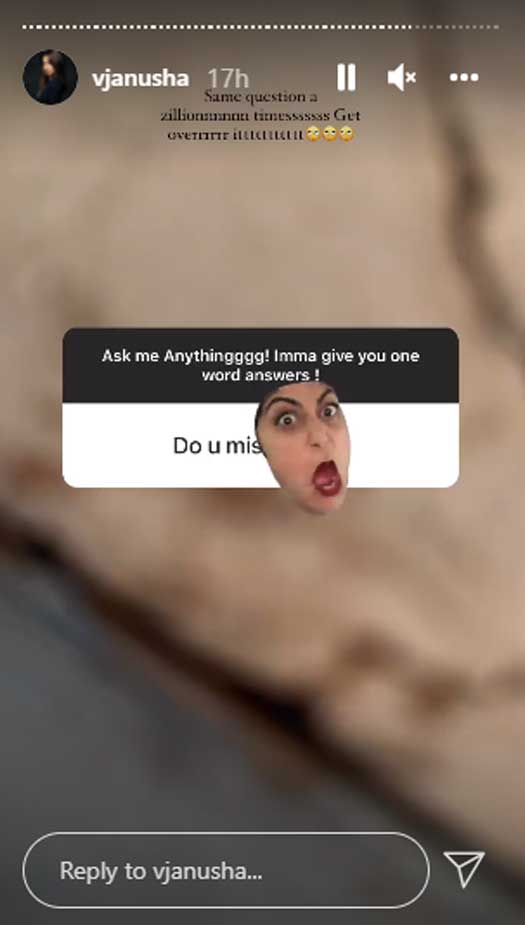 Sharing this question on her Instagram story, Anusha Dandekar posted an animated post in the name of Karan and wrote, “Same question a zillion times sssssss get overrrr tttattat”.

Well, we hope the actress’ latest reaction will stop fans and followers from repeating the same question over and over again.

Last month, Anusha Dandekar took to her Instagram account and shared a cryptic post on Instagram after Karan Kundrra expressed regret over their breakup on Bigg Boss 15. Taking a jibe at her ex-boyfriend Karan, she wrote, “He doesn’t lie to you because the truth will hurt your feelings. He lies to you because the truth can lead you to make choices that will not serve his interests. ,

Deepika Padukone “Felt Cute” And Posted These Pics. We Are Glad She Didn’t “Delete Later”

When Sidharth Shukla Said He Has “Miles To Go Before Sleeping” Less Than A Year...

Shraddha Kapoor Started Her Week On A Sunny Note. Here’s How