Jacqueline Fernandez and Akshay Kumar will co-star in Ram Setu

Jacqueline Fernandez also shared a glimpse from her helicopter ride with Akshay Kumar on Instagram Stories this morning.

Bollywood actor Akshay Kumar was seen indulging in some fun shenanigans with his Ram Setu co-star Jacqueline Fernandez recently. The actor posted a video on Instagram on Tuesday which showed Jacqueline curling her hair in a unique way. The footage showed the 36-year-old actress sitting inside a helicopter as she curled a portion of her hair mid-air. Jacqueline came up with the novel idea by exposing a few strands of her hair to the wind through the hole in the helicopter window. As the Sir-Lankan actress exposed the part of her hair with the wind outside, she showed how they were all curled in a completely natural way.

The footage was posted on Instagram by Akshay who added the caption, “Ladies, here’s a hack for y’all,courtesy Jacqueline Jugaadu. Watch and learn how to curl your hair mid-air in a helicopter.” The hilarious video has been viewed over 1.3 million times since it was posted on the social media platform.

Jacqueline also shared a glimpse from her helicopter ride with Akshay on Instagram Stories this morning. The actress had shared a picture from the Mumbai airport on Tuesday as she posed inside the lounge area. Jacqueline was dressed in an all-white attire which comprised a white sweatshirt and sweatpants. The actress completed her look with matching white heel boots and a white face mask.

In the following Stories, the actress posted a video that showed Akshay sitting across her in the helicopter. The actor was dressed in a blue jacket and wore aviators as he looked at the view from the window. Jacqueline then asked Akshay, “What shoot are we going for?” To this, the actor responded, “Ram Setu.” He then asked Jacqueline what she was doing and tried to take the phone from her.

In the following Stories shared by Jacqueline, Akshay was seen recording Jacqueline, who was wearing a pimple controlling patch on her cheek. The text over the video read, “Akshay Kumar making fun of my pimple sticker.” 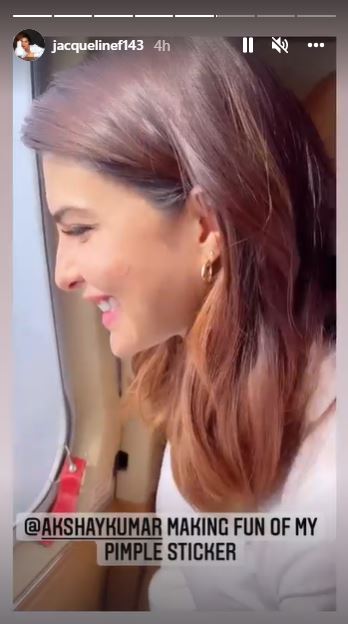 Have you checked the recent Instagram updates shared by Jacqueline and Akshay?

Rashmi Rocket: Taapsee Pannu Starrer Recieves Rave Reviews From All Across The Globe

Nora Fatehi Photos: It will be difficult to take your eyes off Nora Fatehi’s sizzling...