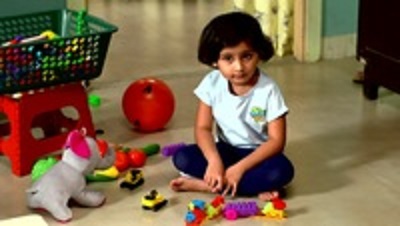 In the latest episode of Mazhi Tuzhi Reshimgaath, Yash calls the ambulance as Neha’s health deteriorates. On hearing about the hospital and ambulance, Neha gets shocked.
Later, Yash takes care of Pari by combing her hair. While combing her hair, Pari places her clip in Yash’s hair and on seeing himself in the mirror with the clip in his hair, Yash laughs. Yash then asks Pari whether she’s hungry, and she says yes. Yash then asks her about what she would like to eat. Pari then asks him to cook Modak, Roti, Rice, and everything, which surprises Yash. Neha chuckles as she hears this. As Yash enters the kitchen, he fails to light the gas and inquires Neha about it. Will Yash pass in doing Neha’s chores?

In the previous episode of Mazhi Tuzhi Reshimgaath, we have seen that, Neha breaks down in tears as she recalls Pari’s words. When Yash enters Neha’s room, she shares her feelings with him and questions him if she is at fault. Yash then consoles her, telling her it’s not her fault. Next, Yash thanks Neha for seeking his help and tells her that they’ve now become true friends. He further tells her that they should celebrate their friendship by eating Pav Bhaji and makes her grin.

Neha hands over the cheque of INR 10,000 to Yash. As Yash denies accepting it, Neha requests him to do so. On witnessing this, Pari goes and brings a cheque for Yash. She states in the cheque that she will provide the money to Yash soon. She then tells Yash that he had to pay the money because of her so she will return the money to him as soon as she grows up and earns money. On hearing this, Yash and Neha’s eyes well up with tears. Neha then kisses Pari’s forehead and gives her a heartfelt hug. On seeing Yash and Pari’s love, Neha feels delighted.

In the morning, Pari apologises to Neha for her behaviour. Neha also apologises to Pari for hitting her and reasons with her. Afterwards, Pari finds that Neha is not well, but Neha tells her that she is fine. As Pari leaves the room, Neha checks her temperature and finds that she has a fever. Soon after, as Yash enters the office, he finds Neha missing. After that, he pins Pari’s cheque on his green board. As Neha informs Shefali of her health on a call, Shefali’s reaction to it makes Yash and Neha giggle. When Yash inquires about Shefali’s reaction, she informs him that Neha’s health is not good. When Yash calls Neha out of concern, Pari picks up the phone and complains to Yash regarding Neha. Pari also informs Yash that Bandu Kaka and Kaku have gone to Alibag, and she expresses her concern to Yash regarding Neha. She then invites Yash to her place to look after Neha.

Kartik Aaryan Crosses Over To The Dark Side. Is It Halloween Already?