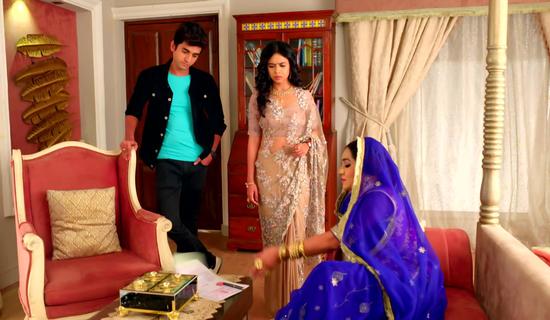 In the previous episode, a desolate Rani visits the temple and breaks down in tears. She recalls some fond moments spent with Veer and wonders where Vijaya has hidden him. Veer senses Rani’s pain and vows to be there for her in spirit. The next day, as per Vijaya’s orders, Rani takes servant’s uniforms for Veer’s family members and tells Shanti to make sure that everyone wears the uniform when she sees them the next time. Vijaya witnesses the exchange and rejoices when Rani puts Vikram in his place for opposing her. Rajeshwari refuses to be forced into Vijaya’s servitude and conveys the same to her family members. To prevent them from reaching out to the police, Vijaya gets her guards to snatch their phones and states that she will not hand over Veer’s ashes unless everyone obeys her. Meanwhile, Suraj tries to get Veer to reveal where he has kept the contract papers, but Veer stubbornly remains silent. Jaising and Champa get into an argument and Jaising tells her and Nandini to keep up the charade in front of his parents. Desperate for Veer’s ashes, Rajeshwari and the others wear the servants’ uniforms and gather along with the other servants of the mansion. Delighted, Vijaya banishes the other servants and tells the Rajawats that all the responsibilities belong to them. Rani divides the chores amongst everyone and promises dire consequences if her orders are not followed.

In the latest episode, Vijaya throws some papers in front of Rani and tells her to sign them. On learning that they are her and Veer’s divorce papers, Rani is left shocked. When Rani refuses to sign them, Suraj calls one of his recruits and tells him to shoot Veer on his other leg as well. To ensure Veer’s safety, Rani signs the divorce papers. Will Vijaya separate Rani and Veer forever with her ploy?

Do Not Disturb, It's Chill O'Clock For Aryan And AbRam. Pic Courtesy