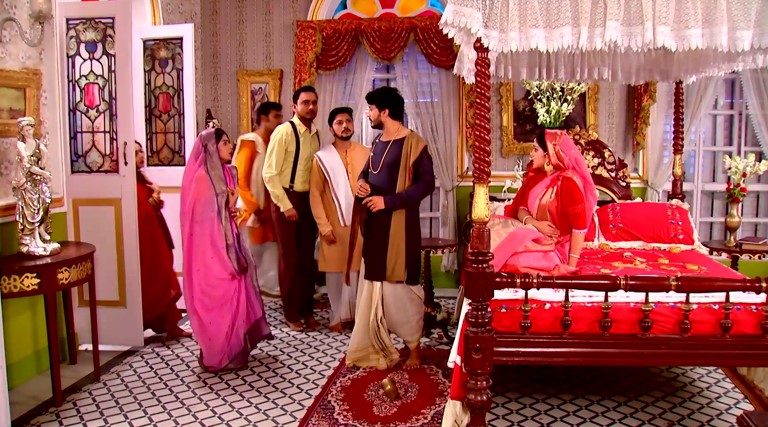 In the previous episode of Rani Rashmoni we see that Sarada takes a sad and forlorn woman home. She gives her milk and food to eat. While Sarada is serving her, the woman sees divine light emanating from Sarada and falls at her feet. The woman says her name is Jogen and her husband is an alcoholic who abuses her. Meanwhile, at Janbazzar Dwarika and Kumudini’s ring game begins. Kamala and Annada tell Kumudini that she must win while Ganesh tells Dwarika that he must win as whoever loses will have to obey their partner throughout their lives.

In the latest episode of Rani Rashmoni, we see that Kumudini finally wins the ring game, though Kamala and Annada feel Dwarika made her win the game. Kamala comes and tells Dwarika that for `Kalritri’ he must sleep with Trilokya while one of the women must sleep with Kumudini. As per custom, on `Kalratri’ which is the night after the wedding, the bride and groom must not see one another. If they do, it is believed to bring bad luck upon them. Ganesh teases Dwarika and says Dwarika will have to be locked up for he may not be able to stay away from Kumudini. Dwarika is related. Kamala tells Kumudini that among all the grooms, Dwarika is the only one who sings beautifully, and she should ask him to sing for her someday. Kumudini cannot believe she is so blessed.

When Annada takes Kumudini to Dwarika’s room to spend the `Kalratri’ there, Kumudini, who is exhausted takes off her jewellery and falls asleep. Dwarika who needs to take his clothes comes to his room and calls out to Annada, but there is no response. He decides to enter the room. He finds that jewelry scattered all over the bed and is worried Padma may see it and get angry. He tries to wake up Kumudini to ask her to keep the jewelry carefully.When his hand accidentally touches glass and it falls and makes a sound, Kumudini wakes up and starts calling out to everyone as he thinks it’s a thief. Dwarika tells her to stop screaming and while he does that Kumudini sees his face on `Kalratri’. Padma and the others hear her scream and come running to her room. Though Padma is upset with Dwarika for coming into Kumudini’s room she shouts at Kumudini for seeing Dwarika’s face on `Kalratri’. She finds the jewelry all scattered across the bed and is furious with Kumudini. Ganesh laughs and says this is the reason why he had suggested that Dwarika should be locked up.

Trilokya hopes no misfortune befalls the family because Kumudini saw Dwarika’s face on `Kalratri’. Dwarika says he does not believe in these things. After Dwarika leaves, Kumudini worries that nothing bad befalls them because she broke the `Kalratri’ tradition. Annada tells Kumudini to pray to Ma Kali and everything will be alright.

The next day at the temple Haran Thakur criticizes Gadadhar for encouraging women to come to the temple. Hriday tells him not to get jealous because they do not come to him and go to Gadadhar instead. When Haran Thakur comes out, he finds Jogen standing outside and talking to Sarada. Jogen tells Sarada that she got sweets for Gadadhar and her and asks her to give it to him. Jogen says she is relieved after meeting her and Gadadhar and the peace she has experienced since then will help her tide over all her problems. Sarada asks Jogen if she would not like her husband to be free of his addiction and tells her to meet Gadadhar and ask him to show her the way.

Haran Thakur tells Bodon Thakur that now that the sweets have started coming from rich households of landlords, soon gifts and donations will follow.

Jogen goes to the Kali temple and hears Gadadhar sing a `Shyama Sangeet’ for Ma Kali and is moved by his devotional song.

What will happen next? Stream Rani Rashmoni premiere episodes before TV only on Digihunt! Watch more stories and updates on Digihunt News.

5 key differences we will see