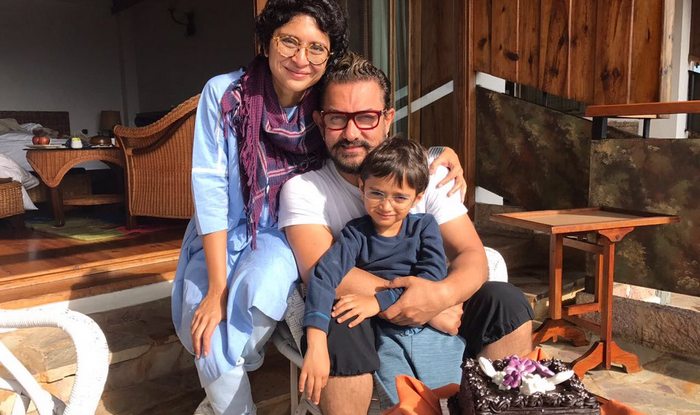 On a Sunday afternoon, Aamir Khan stepped out for a family time with estranged wife Kiran Rao and son Azad Rao at a famous eatery and get snapped by the paps. It was a while ago in July 2021, Aamir Khan officially announced separation with wife Kiran Rao

Aamir Khan is spotted wearing a round neck T-shirt and a pair of denim pants with a watch and his hair was neatly done. Kiran on the other hand opted for a checked blouse with black trousers and a cross body bag. Azad wore a white T-shirt and a pair of gray shorts. The trio happily posed for the camera.

Besides posing with his estranged wife and their son, Aamir also posed with a couple of young fans as well. The actor ensured to wear his mask and not make his younger fans upset.

Aamir and Kiran have been spotted together a couple times since their separation was announced. They were together in Ladakh, where Aamir shot a portion for Laal Singh Chaddha. The actor and filmmaker posed for pictures with fellow Laal Singh Chaddha stars, Naga Chaitanya and Mona Singh. They also held joint press meets during their stay. Azad had accompanied them during the shoot.

Aamir and Kiran were married and staying together for 15 years before they announced their separation. They also have an elder daughter Ira Khan.

The CMO Maharashtra recently announced that the theaters will be re-opened from October 22 2021 and will strictly follow the Covid-19 rules in order for the cases to not rise on September 25 2021. On September 26 2021, Aamir Khan productions announced the release of Laal Singh Chaddha from December 25 2021 to February 14 2022.

The team recently wrapped up the shoot and some of Aamir Khan’s looks and Kareena’s looks were also revealed. The day of release is awaited now eagerly

Here's When These Much-Awaited Films Will Release

Follow Us
Featured Posts
Drishyam to be remade in non-Indian languages, rights acquired by Panorama Studios International LTD
21 hours ago